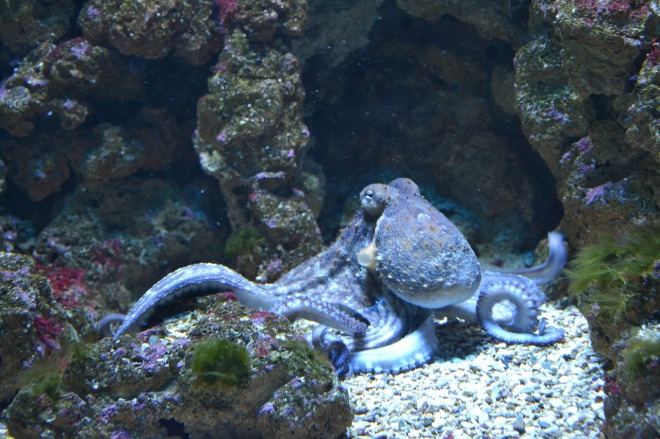 When Ringo Starr composed Octopus’s Garden, he was under the mistaken impression that octopuses are social animals and would be happy to invite strangers into their territory. Nothing could be further from the truth: octopuses aggressively guard their homes and unless mating, usually exist as solitary creatures, living and hunting alone.

Probably because these cephalopods have acquired the reputation of being the curmudgeon of the sea, the results of a recent study on octopuses has gained worldwide attention. The study involved exposing octopuses to the drug ecstasy and observing whether, in a partitioned tank, the test octopus would spend more time playing with a Star Wars figure in one chamber or with a caged octopus housed in another chamber.

Be aware that what I write here is a highly simplified explanation of the experiment and results. The actual experiment used very nice controls and was carefully conducted, e.g. varying the sex of the interacting octopuses, determining drug dose, quantifying time spent in the neutral chamber and the number of chamber transitions and how much of the octopus needed to pass through the chamber opening to call it a transition*, etc. Scientists put a great deal of effort and thought into their experiments because other scientists are more than happy to hammer them if they err. This is called peer review.

The impetus behind performing the experiments came from the recognition that the site that binds ecstasy on a serotonin transporter in humans bore an uncanny resemblance to the same region of a similar protein in the octopus. Serotonin is a neurotransmitter thought to influence mood in humans and when ecstasy displaces serotonin from the binding site on the transporter, it releases this neurotransmitter to affect brain cells and change social behavior. The researchers wanted to answer the question of whether this messaging system still worked in a similar way in the octopus, despite the fact that 500 million years of evolution have elapsed since humans and octopuses shared a common ancestor. Still, a worried reader of a news report on this study commented that giving octopuses ecstasy must be part of a larger research program that involved dosing scientists with LSD.

But back to the experimental results…

The researchers observed that undosed octopuses spent more time with the toy, while octopuses high on ecstasy would get up-close and personal with the other octopus. The investigators concluded that, like humans, ecstasy has a prosocial effect on octopuses.

I had a first-hand experience of the prosocial effects of ecstasy some years ago when I rode the New York City subway to work. The dude I met was dressed in business casual attire, although a tad on the unkempt side. He was smiling and his eyes were shining, and he was soooo happy to be going to work, but wasn’t exactly sure where work was and what stop he should take. In addition to an unnatural level of joy, he also had a child-like trust that made me fear for his safety. I tried to explain to him at which stop he should get off the train and he nodded, delighted with this information, but I wasn’t sure he was processing it. My stop came before his and as I stood on the platform watching uncertainly while the train pulled out, he gave me this beatific smile and floppy-handed wave.  I hope he’s still alive. The dude had no natural defenses.

And this must have been what the social object octopus was thinking as ecstasy-impaired brethren or sistren plastered their ventral parts all over the protective cage. Dude, you are totally gonna get eaten!

Octopuses are generally canny creatures who have perfected the art of introversion into a survival strategy. One hallmark of introversion is self-reliance and octopuses have this trait in spades. When confronted by a predator, this wily cephalopod can sacrifice a tentacle, leaving it to writhe and wriggle as a distraction while the rest of the octopus makes an escape. The octopus will grow back this missing tentacle, so no worries.

Also, never underestimate the octopus’s ability to fight dirty. Just millimeters from the jaws of death, they can outwit a pyjama shark by slithering a tentacle into its vulnerable gills, suffocating the shark until it releases our eight-legged friend. But consider that octopuses are not always prey; they can also be the aggressor. Beyond the necessity of hunting for food, these ocean introverts have also been implicated in the mugging of a diver.

[Expert tip: Always ask permission if you would like to take a picture or video of an introvert.]

Clearly, Ringo made certain erroneous assumptions as to how welcome he would be in an octopus’s domain. The inspiration for Octopus’s Garden purportedly came about while Ringo was cruising near Sardinia as a guest on Peter Seller’s yacht in 1968. The ship’s captain described to him how octopuses travel along the seabed, picking up stones and other shiny objects and creating gardens with them. As charming as this origin story may be, I hypothesize that this idealized interpretation of the octopus may have had its origins in a certain prosocial pharmaceutical.

* The answer is both eyes and mantle.

How to Introvert: Lessons from the Octopus