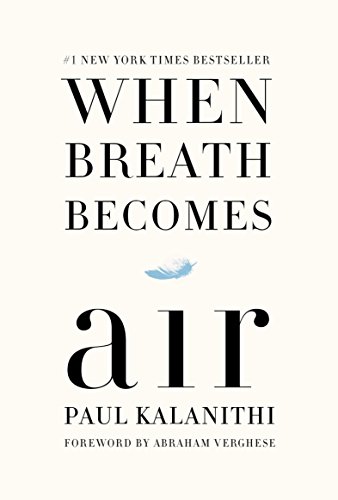 This book by Paul Kalanithi was published posthumously, after he passed away from metastatic lung cancer. The book was written as he was dying from the disease and his narrative includes scenes from his early, formative years, as well as his excruciating descent into pain, debilitation and surprisingly, the joys of fatherhood. He was only thirty-five and his death deprived this world of everything else that he might have contributed, had he lived longer. Kalanithi was one of those rare people who really could have been anything he wanted to be when he grew up. Most of us are told this myth while we’re growing up (I can be an NBA player?) and most of us lack the talent (but I can’t dribble without accidentally kicking the ball) and/or lack the prerequisites (I’m only 5’3″ on a good day) and/or lack the discipline to make the dream a reality (Practice? Nah, rather read a book).

At the time of his death, Kalanithi was a highly skilled neurosurgeon and scientist. Prior to deciding to train in medicine, he obtained advanced degrees in the humanities, earning a Masters in English Literature from Standford and a M.Phil in the history and philosophy of science and medicine from Cambridge. Despite all of his achievements, he remained humble, recognizing how weak we are in the face of the overwhelming entropy of the universe. The only solace in losing such a talented and thoughtful person is that he was able to accomplish more in his short thirty-five years than most of us achieve in a lifetime. Still, what a waste.

Throughout the book, the author quotes widely from luminaries who had thought deeply about life, death, and whatever little meaning we can derive from these experiences. But they pontificated from a safe distance. Kalanithi’s words have greater immediacy and pathos because the Grim Reaper was right there at his side, informing the creative process.

I have some small experience in sharing space with the Grim Reaper, so I was struck by Kalanithi’s observation that cancer left one in a state of both knowing and not knowing. In his case, he knew he was terminal, but he had no idea how much time he had left. Because he simultaneously knew and didn’t know, this made decisions about how to spend his remaining time extremely difficult. Cancer, then, is Schrödinger’s disease.

[To explain, Schrödinger’s cat was a thought experiment meant to deride the concept of quantum superposition applied to everyday objects. Superposition describes a quantum system, such as an atom or photon, that can exist as a combination of multiple states corresponding to different possible outcomes. The quantum system remains in this condition of all possible states until it is observed / interacted with by the external world, at which time it collapses into one of the possible states. (Sort of a ‘caught you looking’ moment.) Schrödinger posited a cat placed in a box with a radioactive substance, a detector, a hammer and a flask of poison. The amount of radioactive material is so small that perhaps in the course of time allotted to the experiment, one of the atoms decays, but also, with equal probability, perhaps none decays. If radioactive decay is detected, the hammer smashes the flask, releasing the poison and killing the cat. If the substance does not decay, the cat lives on. According to quantum superposition, until the system is disturbed by observation, the cat is both living and dead because the radioactive substance has both decayed and not decayed. Rubbish, said Schrödinger, but somehow Schrödinger’s cat has become the fable to describe quantum superposition. It should be noted that this story also shows why physicists are better than biologists. The whole thing was only ever a thought experiment: no kitties were harmed during the conduct of the experiment.]

Schrödinger’s disease is the superposition of mortality and survival. During the course of normal life, there are gradual shifts in the probabilities of these two states: a higher probability of mortality when we are young and defenseless, declining as we grow older, stronger and wiser, and then increasing again as old age grabs us by the scruff. The sudden, jarring suspension of the shift when cancer arises is seismic, but not in a good way, like a haka. In a previous post, I touched on cemetery gates as liminal spaces that occupy a position on both sides of the disparate states of life and death. Schrödinger’s disease creates another such liminal space and if you win the genetic lottery, you can step off the knife’s edge and back into the world of the living, albeit with a permanent sense of disorientation and dislocation. Kalanithi’s story demonstrates the need for help in making a more graceful dismount for those who land on the other side of the knife’s edge. In ancient times, there were entities who served as guides for the dead and dying.

Psychopomps are the archetypal escorts for the dying, frequently described as compassionate beings who offer their assistance to bring souls through the transition to the afterlife. Throughout much of human history, they offered comfort to the dying by at least confirming that there was some form of existence after the death of the body. But not all representations of psychopomps were warm and cuddly. The Grim Reaper first came to us in the 14th century during the Black Death, when one third of the human population died from plague. He used his scythe to sever the last remaining ties of the soul to the body and when he called, he was not taking no for an answer. Anubis, the Egyptian jackal god, would lead the dead to the afterlife and then weigh the hearts of the dead souls against the weight of a feather, representing truth. If the scale of justice tipped toward the heart, the dead person would be consumed by Ammit, a female demon the ancient Egyptian people dubbed “devourer of the dead.”  The need for help in achieving an ordered, sensible transition is something the modern mind may share with our predecessors from ancient times, but we want something that is neither indifferent to our individuality nor something that  constitutes impersonal justice.

Soul Search is a modern tale of the psychopomp. In this story, the psychopomp (in the form of a hound, per the Native American belief system) is dedicated to rescuing the lost dead and escorting the dying to the next life. While compassionate and gentle with the dead, she is less inclined to think well of the living, when she thinks of them at all. Having spent too many millennia watching humans play out their same little dramas again and again, the psychopomp is bored by the living. She is somewhat protective of those humans who support her mission, but yawns as only an immortal can when confronted by mortal challenges and dilemmas. But the characteristic that sets this psychopomp apart from her ancient predecessors is her sense of humor.

I have at least two extrovert friends who have come up with innovative and funny ways of dealing with modern funeral rites.  One friend wants to situate his closed casket next to the church’s organ. As his last song, he would request “Pop Goes the Weasel,” but never allow the organist to bring the song to its climactic end, drawing the mourners ever closer to the edge of their seats, as they watch the casket’s lid with growing anticipation. My other friend wants to fill her belly with popcorn kernels before dying and then have her body cremated.

While I am amused by my friends’ approaches for whistling past the graveyard, their methods don’t jibe with my personal philosophy on the dark arts of introversion. I will need to find another way to make one final joke before departing this life. Suggestions are welcome…

If you would like to comment on anything in these posts, I would be delighted to hear from you. Please visit my author’s website to learn more about progress with the Zackie Story series, author appearances, or to send me a message, etc. Or if you prefer, you can also find me on Facebook (at least until another social media platform emerges that will actually safeguard user privacy). Feel free to friend me and send me a message so I’ll know you’re not just a bot.

Soul Search, Soul Scent, and Soul Sign, novels of supernatural suspense, have been described as Dean Koontz’s Odd Thomas meets Piers Anthony’s On a Pale Horse. Readers have praised these novels for the very human stories behind the hauntings that create unexpected plot twists, drama, and even moments of humor. The Zackie Stories are available for purchase on Amazon (ebook, paperback, and audiobook) and are free on Kindle Unlimited. The audiobook is also available on Audible.

If you enjoy the Zackie stories, please, please consider leaving a short review on Amazon and/or Goodreads and/or Bookbub. Your review makes a difference and is incredibly valuable, drawing in other readers and providing access to promotional opportunities that require a specific number of reviews to engage. I’ll be your best friend forever if you write a review.

Schrödinger’s Disease and the Introvert

One thought on “Schrödinger’s Disease and the Introvert”